Early this morning I lost my best friend.

Thing is, I didn’t realize he was my best friend until I looked back over the precious 7 years I had with him.

He never judged. Never strayed. Was the happiest to see me come and would shatter into one hundred little dramatic doggy bits when I’d go. His greatest joy was spending time with the select few he trusted enough to let his guard down with and bond to. He wasn’t a dog person, he was a people person. And a hugger.

He was barking, breathing unconditional love and loyalty. If you knew him, you know he was 100% dog.

He died under the moonlight last night on the earth that he loved, where he is now buried.

Thanks to everyone who made his life a little brighter. Rescue dogs need affection the most

A hui hou Buzz. Until we meet again.

Day 1: ON TAKING A BATH WHEN YOU PREFER TO SMELL LIKE A DOG 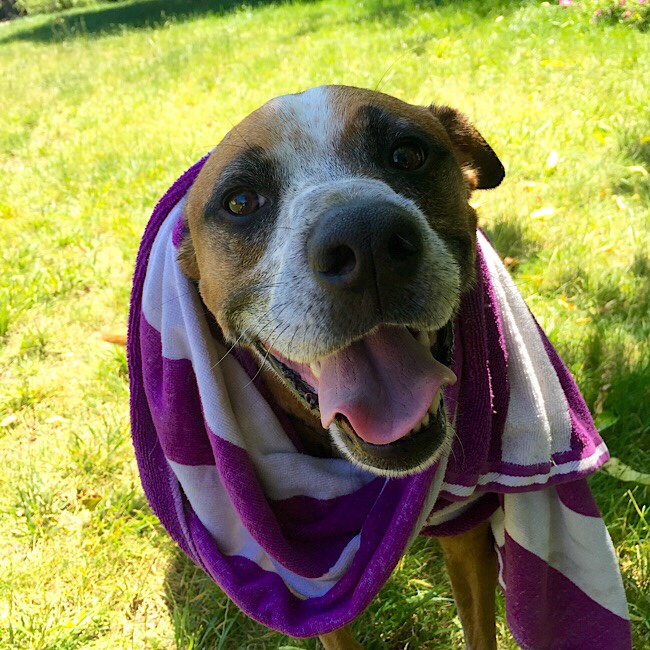 Buzz taught me that sometimes other people know what is best for you. For example, when bath time is past due.

Buzz was no fan of baths and that’s an understatement! Thing is, we didn’t have some kind of obsessive bath routine or anything, I just knew it was cleaning time once he started getting lethargic and unmotivated about life.

He was always watching me to see what’s next on the agenda. If I grabbed the tennis ball he’s up in a flash. The leash, he would literally convulse with joy. But when I picked up that glass gallon jug of dog shampoo he’d slink off the couch and conveniently forget his name when called.

It was a real ordeal. For the sake of my blood pressure I resorted to shameful trickery: putting a leash on him and walking him into the shower.

Under the comfortably warm water he would shiver like a Chihuahua. Squirm and spin, flail and drop. Or officially give up on existence and stare forward with blank hopeless eyes.

But things changed fast when the water turned off and I pulled out the towel.

He’d wiggle and contort with happy squirms as he twisted about, demanding to be wrapped up tight as a Chipotle burrito.

He would be grinning and energetic. Baptized, born again, and smelling like coconut milk, papaya, flowers, and other clean things. Truly a new dog.

And this was his routine…every time. Then he’d curl up in his bed and clean himself like a cat. He was a juxtaposition, happy to smell like dirt and sometimes dead things but loving it just as much when he was fresh as a basket of clean laundry. 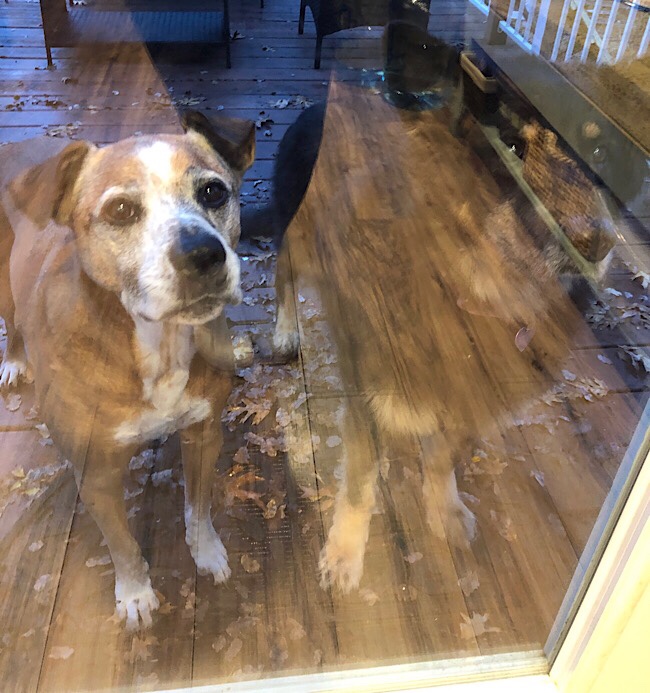 Buzz’s well-being was pretty much always on my mind.

He had a lot of anxiety on account of being surrendered at the pound twice by two different owners. Maybe more, who knows. His backstory was was a hazy tale of abandonment. Even his age and breed were guesses.

So he was an anxious hound dog, compounded by the fact that he was a total diva.

So he’d get to obsessively licking his paws or even chewing his tale when I was gone. Maybe he thought each time I left would be the last time he saw me. Or maybe a dog needs his person, simple as at.

But ok yeah, separation anxiety is really sad and I think it should be talked about and educated upon, but Buzz wasn’t just a stressed out head case. It wasn’t a negative I was trying to fix, it was a positive that added a whole lot of value to my life.

See, Buzz LOVED comfort. To be pampered. No matter how happily dirty he was he’d seek out the cleanest blanket or the softest couch, and wiggle around on it in ecstasy.

You never saw a dog watch your grocery bags closer in hopes of being brought a treat. Maybe that’s most dogs, but with Buzz he just appreciated everything so much.

And he went hard on the gifts.

The psychotic relish in which he’d tear apart a random thrift store stuffed animal was a thing to behold.

And that’s what it comes down to, I realized. How good it felt to care for him because he just thrived on attention and pampering but never expected it.

His happiness was contagious, simple as that.

So it’s pretty weird to see the imprint of buzz fading. There’s just not dog hair on anything and I’m not happy about it haha.

A week ago and I’d have been THRILLED to have less dog hair around. Now my place is too clean. Feels unnatural.

Toys are picked up. Water bowls are empty. I suppose I can donate his food, I won’t be eating it, yuck.

Today’s observation is that important things both leave and root more deeply in stages. He feels as present as ever to me despite no longer having a physical presence.

Doesn’t mean I’m throwing away his stuff though. Nope! I’m keeping it all and wish I had more. My priceless Buzz mementos that help capture our priceless moments.

It seems pretty obvious to me that corona virus sheltering-in-place is actually a conspiracy theory to keep us home with our pets.

It’s true Buzz, I’ve failed to greave you properly the last few days. Yep, life got hectic and I didn’t carve out any quiet reflection time to feel your awayness.

I also went up to the shelter and hung out with some neat dogs. I almost adopted the sweetest old stray gal named Gracie. She was probably just as happy and mentally insane as you. But I didn’t. I hope she finds the perfect person but right now, I’m not ready to quit missing you.

So yeah old buddy, I slacked on your month of eulogies but truth is I haven’t been in the place to write about you. Grief and gratitude are apparently uneven, undulating things and I’m glad to be exploring this through your memory.

Love you pup. I’ll write up a good story about you tomorrow. Promise

Day 6: RESPECT MUST BE EARNED FROM POUND HOUNDS

I’m not sure why my mom and brother decided to peruse the pound that day, but I’m sure they had zero intention of adopting.

They had never come across those Buzz puppy eyes though.

They hung out with him back when the shelters were big rooms with chain-link fenced barriers. Like a real prison : (

Anyway, that place of sorrow that reeked of fear did not keep them from falling in love with Buzz Dog.

Because this was a family adoption though, they felt I should agree to it. I didn’t care since he wasn’t going to be my dog (haha little did I know!) but I went along anyway.

Once there, I was sitting on a bench outside and Buzz came up and jumped on my lap like he wasn’t 50 pounds, and stared into my eyes like a human. The funny thing is, he never did this again in all the years I had him.

He just knew, this was his time to impress lol. So we got him and soon as we got him back home he bolted. Like he did for years whenever he had the chance to get through an open door or gate. Little by little though, he stared turning back when I called him. He started pulling less on the leash and trusting me to lead after maybe 3 years of twice daily walks.

It took so much patience and consistency to get him to trust that we were his forever people and no matter what, we were family and that can’t be taken back.

It was one of the most important experiences of my life, seeing something grow and thrive when watered correctly. It’s what I appreciate most about pound dogs, what you see usually isn’t what you get. They are kind of like a gorgeous but ignored piece of antique furniture that just needs some attention to make it shine. 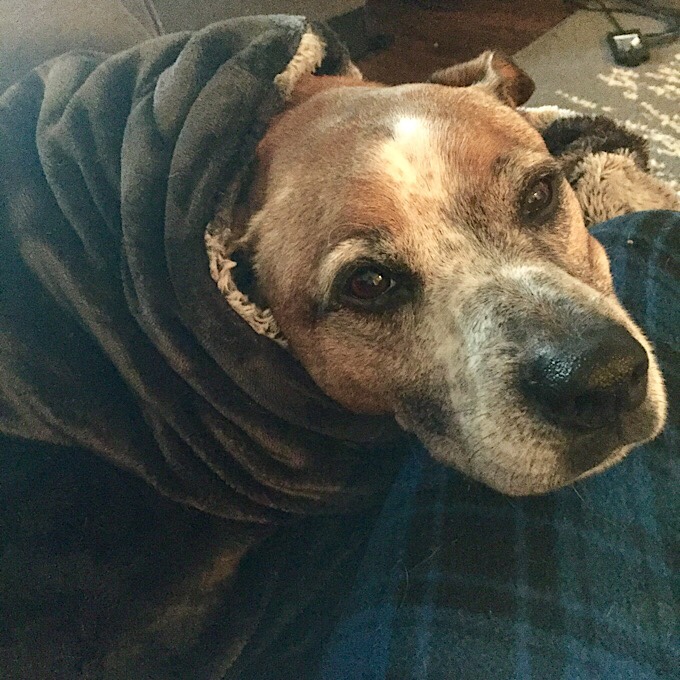 I miss your face old buddy.

And hey, I’m doing good! Dawn helped me understand this:

You were made to make people happy., right? Yeah, duh. So, to be down in the dumps isn’t doing you your due respect. It’s hard and I’m obviously super missing you, but to honor you in the highest means keeping your lessons close.

#1 being to just live your happy dog life each day as it comes. I mean, if that’s not some sort of enlightenment haha.

Sadness tempered with gratitude, because a dogo had and lost is better than a dogo never had.

Day 8: ON BEING A GORGEOUS 4-LEGGED SUPERMODEL 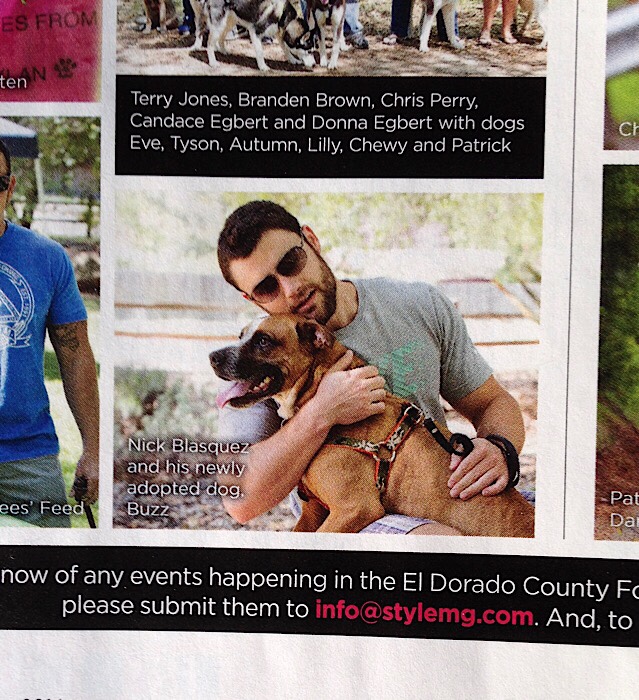 Did you know Buzz was a published dog model? This pic was from our first day out together at the the Hacienda dog park in Cameron Park, CA. It was the grand opening and a photographer from Style Magazine was capturing the day’s happenings.

I’d fostered a rescue dog years before but Buzz—for all intents and purposes—was my first real experience with a shelter dog. And well, I suppose I fully expected him to act dog-like.

He was a runner back then so I was eager to give him some off-leash time at the fenced park. He had shown zero aggression to the neighbor dogs he’d met so I figured he would love some time to make some dog friends without being leashed to his step dad.

Buzz was not a dog dog, he was a people dog. 10 seconds of him smelling noses and butts with other dogs (and only the big ones: Great Danes, Bullies, a Malamute, etc.) and he was good. Dog bonding time complete. Then he was off to meet every person at the park. After that, he’d race off to mark the entire park.

Sniff, mark. Sniff, mark. He went poop 7 times once around the perimeter before I decided that it was time to go.

And I always thought was a great quality, being a people dog. He was loyal to my brother and I, absolutely first and foremost, but he really did love just about everybody. They energized him when he was feeling slumpy and calmed him when he was anxious. The best thing though: watching him sea-saw with joy across the yard when my girlfriend Dawn and I came home.

I sometimes wonder if he thought he was a person. Just blessed with a strong nose and unmatched animal magnetism.

Day 9: INTO THE GREAT WIDE OPEN

Thanks for getting me outside little buddy. Twice a day, everyday. Rain, shine, or snow.

There was no cancelling playground time because it was cold. You didn’t give a hot potato if the asphalt was 120 degrees outside, so I had to, because you’d walk through fire for outdoor time together.

You did once and I couldn’t figure out why you were limping and once I realized it’s because the ground was hot and I had to carry you home the last mile and you were docile (for once). Oh man I felt BEYOND TERRIBLE—but I learned something about you too.

You were the kind of dog who’d trot into a burning home to warn your people. Or pull a Homeward Bound if your people left without telling you.

On extra hot days after that, we switched to walks on dirt roads, but I never forgot about that day.